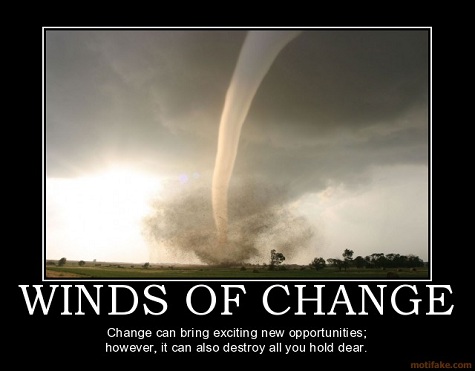 Life is all about change. Humans, in order to survive and thrive, must be adaptable to change.  If not, you end up denying indisputable climate data and supporting a candidate that promises to make everything great again. So we here at the Yokel want to be adaptable. We don’t want to end up stockpiling canned goods and squatting on National Wildlife preserves. We really don’t! That’s why we want to accept all of the changes we saw at the meeting last night no matter how hard that may be.

First we’ll start with someone who could use a bit of change.

We’ve done a few posts about Billy’s oppositional defiance disorder.When he can bring himself to vote he never, ever says Aye. Everyone else can do it,  but Billy likes to be a trailblazer. Nobody is going to tell him how to talk,  no sirree Bob. Until Billy sends us a message explaining why he does this we’re going to refer to him as a:

Next on the agenda is some sewer talk. The two amendments to the code and one out of sequence item concerning sewer hookup to Lewistown were passed with little to no fanfare. Then came the third reading section of the evening.

First off, Jessica tables the bill concerning the changes that can be made to historical designations. Of course Xenu is playing a hand in this. And the FNP article on it acknowledges as much. We here at the Yokel agree with Mark Long’s public comments concerning the Scientologists turning the land over to the park service. Enough is enough. We don’t want a bizarre cult recruitment center thinly disguised as a very ineffective drug treatment center in our neck of the woods.

The next bill was also tabled. This time it was medical cannabis that landed on the cutting room floor. In a separate FNP article we learn:

Keegan-Ayer said after Tuesday’s County Council meeting she didn’t have four votes among the seven council members to approve the bill. In early March, she told The Frederick News-Post she believed a majority of the council supported the legislation.

She said Tuesday that she was aware of concerns among some council members, but declined to elaborate what they were.

“In my opinion, they were not based on fact,” Keegan-Ayer said of the concerns.

What’s that you say?! Some council members hold opinions that aren’t based on facts? When did this start? Oh that’s right December 1, 2014.  Come on people, enough craziness about marijuana. There’s even been research suggesting that we may not have the opioid/heroine addiction problems if Nixon hadn’t made everyone so cuckoo over marijuana and let it be researched as a pain management drug. Let’s all operate in the real world..please!!!

Now we come to the part of the meeting that still has us scratching our watches and winding our butts. Remember a few weeks back when Councilman Chemlik was all so against the impact fees?  We recall a long soliloquy in defense of our poor, downtrodden developers. Fast forward to last night and oh how things have changed. We like the change, but that doesn’t mean that we don’t want an explanation! Tony is now for both of these fees! He was so very excited to vote for them that he screamed Aye into his microphone before the vote had even been taken. We would like to accept his vote and move on, but we can’t.  What the hell happened?