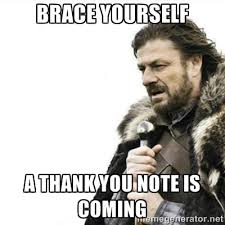 Since Kirby and Billy have started doing Facebook reviews of local event venues with poor business practices, numerous brides now know that the most important event of their lives!!!!! (clutch your new, blue hanky) could be jeopardized. At least, if they schedule them at places that fail to comply with common laws that businesses in surely every last county in America are subject to. Luckily Frederick County couples now know which specific places they will plan to avoid, and that they should be cautious about plans down the road, so we extend a hearty, “Thank you!”

Speaking of jeopardizing weddings, Blaine thanks you in advance, as well. Eventually he will find someone willing to overlook his past transgressions and buy his line of nonsense that he again has turned over a new leaf, again (did we say that again?).

The Yokels also thank you, as you have apparently opened our audience up to some new readership. We are speculating that it could be coming from the Oakdale-had-to-move-their-prom feeder area. And also some folks who are also subscribing to The Knot this year.

One thought on “Thank you Shrelauter, from yer Yokels and all future bridezillas”