Jessica and Jerry are absent this evening. Thank Dionysus there wasn’t anything too important on tonight’s agenda!

No props tonight folks! We did have one public commenter who was also very angry though. Something concerning a sewer line issue on his property. This guy asks the council what good do they think they are? And you all look weak and bad! He’s also angry at the county attorney. In his closing remarks, Bud says that he will not comment on issues that are in litigation. So, though we don’t know the details of this fella’s issues, and he very well may have a legitimate claim, everyone knows that you catch more flies with honey.

Billy won’t turn on his microphone, ,but since everyone else knows how things work, we can tell that he votes against the budget adjustments and the minutes.

We are about to get a nice presentation about Frederick County Land Preservation , Parks and Recreation Plan. Contrary to the agenda, this presentation is not just for council information but needs to be voted upon. Billy throws objections around and was quickly rebuked by the chief of staff. If this plan isn’t approved by July 1st the county could lose a piece of the $1,015,000 that the state gives out. Billy is the only one who asks questions, more like observations really. Tells the Parks and Rec department that they must have a good staff and it seems like he’s on board. However, when it comes to voting time he is the sole no. Seriously folks, this guy’s only legislative style is obstruction.

There is a public hearing on the “closure” of a couple of county roads. Closure is in quotation marks because the road isn’t really being closed. It’s just being transferred from county hands to private. There’s a lot of back story on  this,  but it only affects a few people who live in the Countryside neighborhood, all who seem to be on board. So we’ll leave these screenshots for those that want more info: 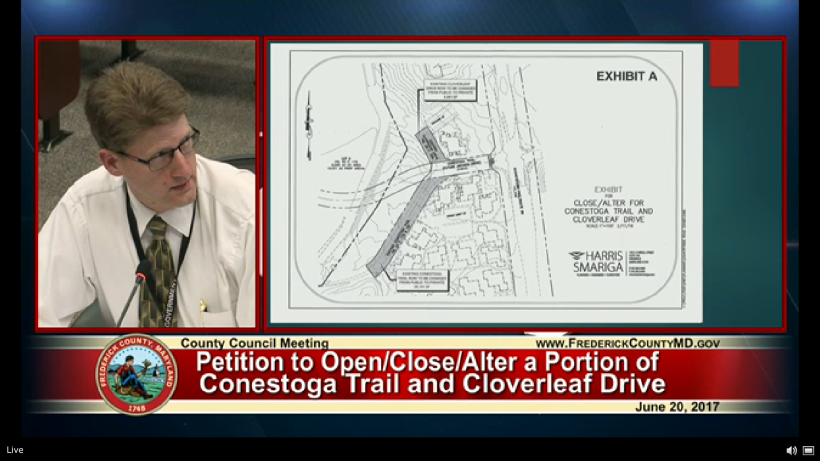 No public commenters at the end of the meeting!

Kirby and Tony pass on their council member comments.

Then we think Billy has turned a new leaf. In the spirit of Jessica and Jerry, he actually talks about an event he attended. And says nice things!  We are aghast! Then, he’s back.

Billy loves public comment! He wants us all to remember last week when someone came up to talk about how very angry she was with the chair! (Really, Billy how could we ever forget?) He accuses Bud of not putting things on the agenda! And then says that the “disjointed” council and “dysfunction” are going to continue until the council gets new leadership. In Billy’s twisted logic the reason the council hasn’t been able to function for the last three years is because of the leadership!!! NOTHING TO DO WITH HIM!

M.C. calls on all of us to remember those that lost their lives on the USS Fitzgerald.

Bud tells us that his office is always open to any council member who wants to talk. Only one member of the council hasn’t taken him up on that offer. Poll time!