Due to the craziness of the evening, your Lady Yokels joined the meeting seven minutes late. There was a nice gentlemen from Middletown giving some public comment. Apparently, Kirby contacted the Middletown city manager and constructed some budget amendment that has everyone believing that he wants to cut funding from the new library. After three years of sitting through Kirby’s amendments we are very sympathetic to anyone who has to try and parse them out.

After M.C. suggests that Kirby go back and look at his 39th amendment (and my God people are we going to have to sit through HOURS of his amendments again!!!), which he does. He then insists that this amendment only applies to 2019. And look people he’s just trying to look out for the taxpayer!

Billy abstains from both the budget adjustment and the minutes. Good thing we saved your liver from that nonsense this week.

There is a First Reading on the Frederick County Sustainability Commission that you can read about here.

Then we have three Third Readings to get through. First off is Billy’s bill concerning the Senior/Retired Military tax credit. You know, the one that Tony had to practically re-write for him. Well, Jerry, M.C., and Jessica want an income cap added to this bill. Because not every retired military person is in need of a tax break! Added to that is the fact that every other tax credit has an income cap, but for some reason this one sailed through without one. Probably because there were so many other problems with it! Anyhoo, Billy predictably says that Jerry doesn’t like veterans and old people. To which Jerry replies, “I knew you were going to say something like that!”

Next up is Tony’s off-track gambling bill. Tony thinks allowing this will help tourism and that horse gambling is different from different kinds of gambling. M.C. is the only one who disagrees and this bill passes 6-1.

The last third reader is the Veteran’s Advisory Council bill and that passes with little fanfare, 7-0.

Now, there are three public hearings. We kind of space out on some of these issues, so you can go ahead and look at these slides regarding the FY 2018 Installment Purchase Application Farm/Land Preservation Program: 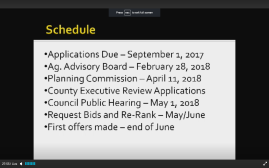 The top ten applications were approved 7-0.

Next we have a public hearing on the City of Frederick Enterprise Zone on the Golden Mile. The city is the main entity affected by this, but the county plays a part and must also vote for it. The Golden Mile qualifies for this tax program because of the poverty and vacant buildings in that area Anyone who lives here wants to see that strip do well again. Especially since they are going to lose Toys R Us soon. Well, there’s lots of questions from the peanut gallery, but nothing too bad or out of the ordinary. Until Billy…. He ‘finds it interesting” that those who voted against his tax credit bill are for giving ‘Wall Street corporations” tax welfare. But get this people, Billy is also for this credit. Jerry points out that these bills are “different animals altogether” and Jessica points out these are small businesses not Wall Street corporations. Billy tries again to make his point to which Jessica snaps and tells him to keep on with his talking points, maybe one day it will work out for ya!

The last hearing, before the break, concerns a Petition to Alter County Roads in the Frederick City Watershed. The City of Frederick is trying to alter roads and put up gates in an effort to stop all the illegal dumping that goes on back there. We couldn’t watch the rest of this, so we’ll have to check back on it tomorrow.

Meeting reconvenes at 7:00 for a bunch of public hearings. We predict a big crowd in the house tonight!

One thought on “Everyone has had it with Billy! And Kirby is confusing everyone out in Middletown. Your May Day first half of the meeting report!”