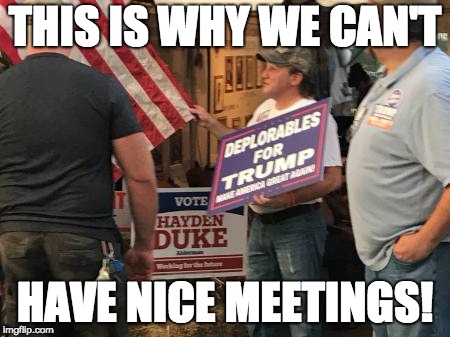 We can’t say enough terrible things about Billy due to his abhorrent behavior during this entire meeting! Just about the worst we’ve ever seen, and you know that must mean something coming from the likes of us! Let’s get right down to it.

The council recognizes the achievements of the Frederick High basketball team, which is nice to see! Shannon Moore is on site to present some changes that need to be made to the sustainability commission. We are waiting for Kirby to trigger when it comes to the discussion of changes that need to be made to the ethics law, but instead Billy takes up the cause! County Attorney Linda Thall explains that when the state makes changes to the ethics law, the county must follow suit. Such changes have to do with former lobbyists and what they can and cannot do if hired by the county,not using your political office to secure campaign donations, and increases to  fines shall a candidate fail to adhere to a reporting deadline. Well, Billy has thoughts! He demands Ms. Thall tell him how we can realistically “upgrade” the ethics law if we don’t change the Public Information Act (PIA)! He is explained to that the PIA is a state law and the county cannot change a state law. But, but, Billy then claims there are no fines if the government doesn’t comply. Well, that is also not true. Billy knows all kinds of “citizens” who aren’t receiving the information they requested in a timely fashion. Oh we bet he does!

Bud then introduces a bill regarding county council staff compensation. Billy wants to know why only 10 people are listed. Bud tells him that is because that is what is allowed by their current budget. Now hold on to your hats folks because you are not going to believe what comes out of Billy’s mouth next! Billy wants to hire an independent consultant to evaluate the council’s productiveness. Because hey folks, Billy just wants to leave the council in a better place than it is now!

We’ll wait for you to pick yourself up from the floor first before we continue.

Now. M.C. tells Billy that all the information he wants on the council is already available, and she doesn’t see the sense in paying someone to tell them what they already know. Jessica, M.C., and Jerry hall have issues with this bill because of the proposed at-will employee provision. So, we’ll have to keep an eye on this one as it travels down the legislative road!

This is the section of the meeting where things get really, really bad. Lori Depies, Finance Director of Frederick County, is present to ask the council to reconsider Billy’s very bad bill that passed last week. Bill 18-03, Elderly Individual & Retired Military Tax Credit has lots and lots and lots of problems!!! Who could have guessed that Billy would write such a horrible piece of legislation? And that Tony, Bud, and Kirby would just go right along with it?

There’s so much wrong with this bill, we can’t even start to list it all. The most egregious and talked about point is there was no effective date listed. There also was no application deadline, procedures on how to apply, renewal requirements, just all around very poorly executed. Ms. Depies makes the point over and over that it would be impossible for this bill to take effect this year because: a. they have no procedures in place to implement this tax credit that quickly and b. the budget is already in place for this year and this would cause a $1.7 million hit.

Billy has statements. Even though the finance department was never invited to participate in this bill, they did send a fiscal note that Jessica brought up last week, that Billy of course paid no attention to. Nevertheless, he very rudely asks Ms. Depies two times if she ever reached out to him personally. As though it is the responsibility of the finance department to contact a legislator when they are working on a piece of legislation! Ms. Depies informs him, that per council procedures county staff has to be invited to the table to give input to the council. Something Billy certainly did not do! Billy then wants to know if they legally have to do this. Ms. Depies tells him she cannot give him a legal opinion to which he shouts: “It’s just your opinion then!” “No”, the unflappable Ms. Depies replies, “It is my expert opinion as the Finance Director”.

Jessica says that these concerns are exactly why she didn’t vote for the bill in the first place! Billy interrupts her by saying, “Why didn’t you write amendments?” Jessica tells him that first of all, it isn’t my job to write your legislation, and secondly during the workshop it was very clear that you were not open to any changes!  Jerry points out that not having an effective date on the bill is reason enough to reconsider the whole darn thing. Tony wants us all to know he was on a skid-loader when he got the message that this bill was going to be reconsidered, so he’s working at a disadvantage here. But, that doesn’t stop him from asking a ton of questions.

Billy tries one more time to save his very bad bill. He just wants it to go through and then add a replacement bill later, which makes no sense. The lawyer says that this doesn’t address the problem that the Finance Director just made about the procedures and the budget shortfall. Billy then says that Bud was beaten into submission to bring this up tonight. However, when voting time comes EVERYONE but Billy agrees this bill should be reconsidered.

Billy is the sole no vote to go into closed session.

Now it’s time for the public hearing portion of the evening.

Another bad Billy bill is back for public hearing. You know the one from last week that Tony did the work for?  Ray Barnes is the only public speaker and he reiterates the administration’s position that they are against this bill because there are many other non-profits who do good work for the community and the county executive doesn’t want everyone  applying for a tax break. Well, Billy just says that he will put forth a bill for any organization that contacts him. Genius at work!

We can barely stand to write about this wood-chipping bill any longer. Ray Barnes says the administration is still against it because they don’t feel that a wood-waste facility belongs in the General Commercial (GC) zone. But the star of this evenings testimony is Mr. Bussard, proprietor of said wood-waste business. Jessica asks him if this bill addresses his issues, his response? “Will it get the county off my butt?” Now, that’s the kind of testimony your Yokel gals like to hear! He admits to not understanding the legalize of the bill and admits that he actually gets along great with the county. At least with those that work behind the wheel. He also informs us that: 1. He’s never received a fine and 2. He’s looking to move his business anyway. Kirby then feels the need to apologize for the county. He’s so very sorry that the county followed their zoning laws and actually investigated a business that WAS violating said laws. He called it “the most ridiculous thing he has ever witnessed.” Well, hearing him use those words was kind of the most ridiculous thing we ever had to witness, so I guess we are all even now! Billy ends out the discussion by saying that county workers are generally good people, but they have some kind of block here.

In good news, Jerry and Kirby have come together to combine their Senior tax credit bills! Jerry made no secret of the agreement:

For some reason we couldn’t find any similar announcement on Kirby’s page. Wonder why.

Tonight’s discussion ends with M.C.’s new bill about amenities that are just for HOA members being required to be located within a development. Looks like there will be some more discussion on this one before it’s all ironed out.

Don’t forget, gentle readers, Billy believes he should represent our interests in Annapolis. Can you imagine the state-wide embarrassment this would bring us? Local elections matter y’all!

On Monday, April 16th the council will hold a hearing on the BOE budget. If you care about public education, and you know you do, show up or email the council to give them your thoughts!

4 thoughts on “Billy is a boil on the butt of this county government! Your April 10th “we can’t take this much longer” meeting run-down.”