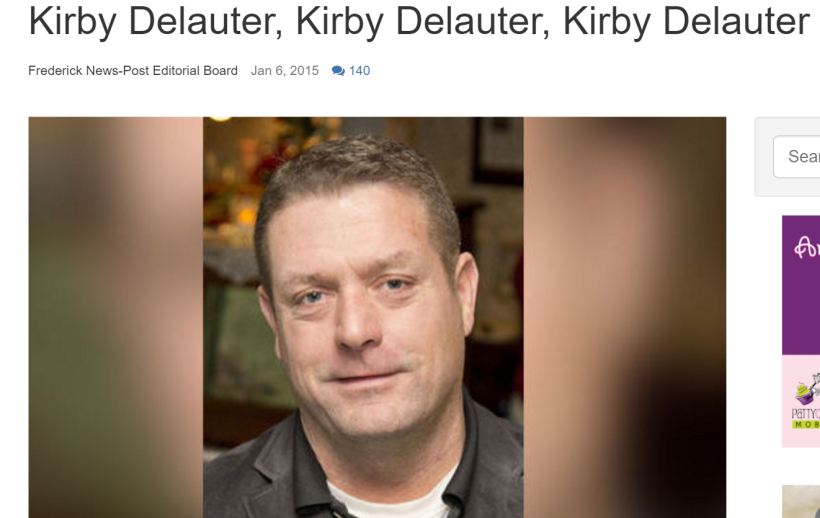 Blanks? Sure, we sometimes use hyphens in the case of expletives. Perhaps we could do that: “K—- D——-.” Or, perhaps, “Councilman [Unauthorized].” We giggled a bit more than we should have when we came up with “the Councilman Formerly Known as Commissioner Kirby Delauter,” which doesn’t seem as funny written down in black and white and includes his name, which defeats the point. Maybe we should just put his initials, “KD,” with an asterisk to a footnote (KD*), or refer to him as GLAT, the acronym for his campaign: “Govern Like A Taxpayer.” We could even make it sound a little hip-hop with a well-placed hyphen: G-Lat. Speaking of, could we get away with “K-Del”? Or we could simply go with the Harry Potter-esque “He Who Shall Not be Named.” (Cue the lightning strike and peal of thunder.)

Yet we could take the low road down even further and childishly mangle “Kirby Delauter” into references you, the reader, would still understand. “Sherbert Deluder,” say. Or “Derby Kelauter.” “Shirley Delaughter” (and don’t call me Shirley). We found a great automatic online anagrammer that generated all kinds of alternatives and could make it a challenge for our readers to decode each time we have to reference the councilman: “Rebuked artily.” That was a good one. “Bakery diluter” is just silly but does have a ring about it. “Keyed rural bit” was another that caught our eye as somewhat telling, because Kirby Delauter’s pretty keyed up. We’re sure there’s a joke in “Brutelike Yard” somewhere.

Discernibly, though, Kirby Delauter’s ignorance of what journalism is and does is no joke, and illustrates one disturbing aspect too prevalent in conservatives’ beliefs: That the media are all-liberal stooges hell bent on pursuing some fictional leftwing agenda. Generally this “fact” is bleated when the facts on the ground differ from conservative talking points. Take Councilman Billy Shreve’s abstract, almost nonsensical defense of KD*: “I think media outlets are cowards and they hide behind the label of journalists and that’s a bully pulpit to expand their liberal” agenda. Cowards? Tell that to the families of the 60 journalists killed in 2014, or the 70 in 2013, or the 74 who died in 2012, according to the Committee to Protect Journalists. All in pursuit of the truth, or the most reliable version of it at hand in the most dangerous regions of the world.

Edifying as it may be to lapse into name calling — and yes, we allowed ourselves a little childishness above and maybe a little bit below — we need to make one serious point the councilman needs to hear and understand: We will not bow to petty intimidation tactics because a local politician thinks he can score political points with his base throwing around empty threats.

Legally, Kirby Delauter has no case.

“Uh, Council Member: In our country, newspapers are actually allowed to write about elected officials (and others) without their permission. It’s an avantgarde experiment, to be sure, but we’ve had some success with it.” You know, that whole First Amendment thing.

That’s why we’re taking his threat with a pinch of salt. We’ve seen this behavior before (not just from Kirby Delauter) and it’s worth highlighting again. Bullying seems to be the only way Kirby “Don’t say my name” Delauter feels he can lead. Only now, the target is not the public at hearings or occasional “punk” staff member, an arrogant, self-serving, whining middle school teacher or fellow “moron” commissioner, it’s The News-Post. Instead of taking his job seriously like the voters demanded and the rest of the council seem to grasp, he’s grabbing at distractionary shoot-the-messenger tactics that make a lot of noise but, to quote Shakespeare, a man who knew drama when he saw it, noise that “signifies nothing.” Frederick County has big issues to tackle in 2015 and we have yet to hear Kirby Delauter sound out one single, sensible idea. He used the word “govern” in his slogan. Maybe he should apply that to his temper first.

Enough. Seriously. What’s Kirby Delauter going to do? Sue everyone who’s making fun of him on Twitter using the #kirbydelauter hashtag, or on Facebook? Boy, his attorney will be able to retire off that.

Reasonable men (and women) are required to move Frederick County forward. All Kirby Delauter is doing yet again is displaying his inability to control his temper, embarrassing himself, his district, the county and those who voted him into office. If he wants to govern like a taxpayer, he needs to respect the taxpayers whose money provides his paycheck, stop this silly, inflammatory nonsense, and get to work.

Absolute brilliance. And anyone Kirby accuses of having a mental illness is okay in our book. Therefore, Mr. Cumber, we wish you all the best and hope you will take with you this Yokel tip of the hat: