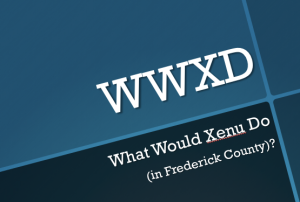 According to the editorial board of the Frederick News Post, we are likely to see the historical designation needed for The Church of Scientology to run a drug rehab and/or group home pass. Shuffling uncomfortably while staring at our feet isn’t going to cut it. The editorial is meant to help us swallow the inevitable from Narconon. No methadone or antidepressants from Scientologists, just bitter pills to swallow. In order to avoid entangling the county in a lawsuit, council members will need to take the first step toward accepting a treatment program that seemingly has no steps. Despite Narconon‘s track record for scams and untimely deaths, they enjoy status as a protected religion under Scientology, and Scientology specializes in exploiting its tax status and religious freedoms in a manner quite similar to the notoriously heinous Westboro “God Hates Fags” Baptist Church.

A word of appreciation is due to Jerry Donald for his efforts to find whatever may be there to satisfy his constituents. Everyone from the Scientologists to the Honeybee Lobby is hunting for the thing that will achieve the end each sees fit, before this matter is put to a vote.

Something desperately needs to change, but it seems probable that denying the historical designation isn’t going to fly. The next steps the community can take will be to ensure that the State knows that Frederick County is watching (a No Narconon at Trout Run Facebook group is a wealth of information). Perhaps state licensing and group home designations may not be compatible with their intended facility. If regulations cannot prevent the facility from opening, regulations for operation must be vigilantly enforced.

Who loves government regulations? This guy, that’s who. Listen up, Xenu. We’ve got our eyes on you.

One thought on “Welcoming Xenu to Frederick County?”