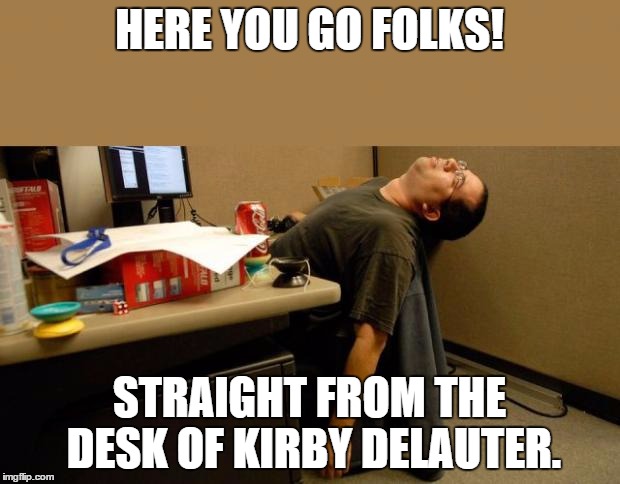 Every few weeks Kirby pens some propaganda for the Emmitsburg News Journal. (Sounds fancy, doesn’t it?)Predictably, Kirby focuses his “column” on the poor persecuted developers of our county. Read what we’ve had to say about this privatization idea here.  He cries foul over Councilman Donald’s email that suggests that letting students eat lunch in the hallway rather than making developers pay their share is pathetic. Then there’s this:

Council Member Chmelik and I met with the Superintendent of Schools Dr. Terry Alban and we mentioned putting a task force together to have the school system lease schools from private entities, a true public, private partnership. One thing I said to Dr. Alban that I think resonated with her was that during the recent snow storm I asked her how she spent her time? She said she was busy coordinating efforts to see when schools could be open. I replied that if she leased the schools from a private entity, she could make a simple phone call and state what day she wanted the schools open, and if they were not open, the entity would pay a penalty, pre-determined within their contract. This way she can concentrate on what she does best, educating students and not worrying about snow removal. I mentioned also that it’s her job to produce students that enter college, vocational school, the military or the workforce that are educated and prepared for this highly competitive world we live in. We all agree on that.

Folks, this hurts our brains. Is this private entity going to be in charge of clearing all the roads to and from the school. Because, if not, how the hell are the students going to get there? And what about all the other schools in the county? This logic truly boggles the mind. It sounds simple and reasonable, until you actually think about it for more than two minutes.  No other new information was obtained from this letter. Other than he’ll have it all worked out in the next “6-12 months”.