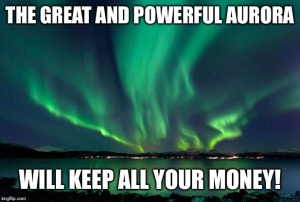 The never-ending saga of the Aurora take over of our county nursing home has taken a new turn. In today’s Frederick News Post we are alerted to a new lawsuit filed by the county:

Instead, the county stated in its counterclaim that Aurora broke its contract with the county by failing to pay several employees for unused annual leave, paid time off and sick leave, up to a total of 96 hours, when the employees resigned.

Aurora took ownership of the operations of the centers on May 1, 2014.

The contract stated that Aurora was to allow all county employees to continue working at the center but didn’t guarantee any length of employment.

To recognize the unused leave that the employees had built up over the course of their employment with the county, the county agreed to give Aurora a payment equivalent to what it would cost to pay out the employees for this time.

But when Aurora terminated the workers’ employment with the company, the counterclaim stated, Aurora refused to pay the employees for their unused leave.

Gardner said she was displeased when she heard this.

We are displeased as well! We thought a nursing home akin to Disney World would be a little more on the up and up. So what happened to this $367,500? And did anyone do any research, beyond a visit, as to how this company functioned? One click to the website Glassdoor, and we found a ton of people complaining about the low wages. But I guess that really didn’t matter to the last BOCC. Because if it’s in the Yellow Pages, well you know.…

Another part of this story bothered us.  The contract that the BOCC signed with Aurora guaranteed county employees a job.  And there was a bunch of talk about how this supposed fact made this a good deal for everyone. However, there was no time limit mandated as to how long Aurora had to keep the former county employees.  So this brings into question the sincerity of the claims that were made to us when this whole deal was going down.  This piece of information also brings back memories of another story in which we uncovered that the contract stipulated Aurora had to cover the current indigent patients. However, they were under no obligation to do so in the future.  Not that this is news or anything, but this contract served no benefit to the residents or employees of Montevue and Citizens. And, if you think for one minute that low wages and high turnover are a good recipe for running a nursing home, then we have some swamp land in Florida we would like to sell you.

Keep up this fight Jan! Who wants to take bets on how quickly Billy will be on WFMD?