This week we have seen an explosion of immaturity from Councilmen Delauter and Shreve. If it had not been for the wise, mature and thoughtful words of our new BFF, Bud Otis, we may have had Delauter’s excavation company dig us a hole where we could drink our fireballs in peace. Bud’s response to the wretched, vitriolic mess that came out of #’s mouth deserves repeating:

“As President of the Frederick County Council, I have continually voiced my support for the highest ethical standards possible for elected officials. We serve the citizens of Frederick County and they deserve officials who are honest, avoid the appearance of impropriety and are open in their activities on behalf of the citizens. My perspective is in line with the overwhelming majority of citizens who want honest government processes and leadership. My perspective has not changed from when I served as Chair of the Ethics Commission.

“As a family man of honor with a long-standing record of ethical service to our citizens, I cannot stand by and allow fellow Council Member Kirby Delauter to make rude and offensive comments about me and other officials during a public broadcast. His recent behavior is reprehensible and warrants a public apology. This is especially important in light of Mr. Delauter’s vote in support of the recently approved Code of Civility.

“Regarding the recently issued Ethics Commission advisory opinion, I would like to clarify that the commission issues opinions based on its interpretation of the Ethics Ordinance. The commission does not create the rules, but it interprets rules that others adopt. County Executive Jan Gardner’s Executive Order, which I fully support, specifically addresses the procurement process and brings fairness and clarity to the citizens and those who wish to do business with Frederick County Government. As the executive and council continue to build our foundation for the future of Charter Government, we are determined to level the playing field for all those interested in bidding on projects with Frederick County Government.

“As I have said before, I believe the Ethics Advisory Opinion is wrong in its position that an elected county council member’s private business can bid on and perform work on county capital improvement projects and contracts. I believe that our citizens agree with me that there is an inherent conflict of interest or appearance of favoritism with an elected official bidding and performing work on county government projects.

“Disparaging others publicly in an emotional rush of words is not appropriate or reflective of a public servant who seeks to have the respect of his constituents. I welcome any citizens to contact me and share their opinions on my positions.”

Wow, wow,wow! Mr. Otis you get our very first tip of our hat: 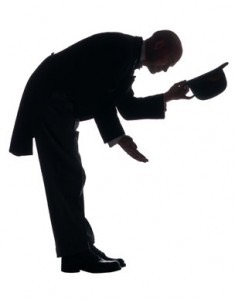 For you sir are a class act. And if your party isn’t happy with you remember there’s always plenty of room on the other side.

One thought on “Tip of our hat”