In today’s edition of the Frederick News Post is a brilliant letter about how unfit Cindy Rose is for a seat on the BoE. The letter writer not only lamented Cindy’s position on transgender people, but the fact that she’s unable to take any criticism on her Facebook pages, and therefore deletes and blocks opinions that differ from her own.We previously discussed, in Part Uno of our Cindy Rose field guide, her call to action to ban the award-winning children’s book Click, Clack, Moo. In case you missed it take a looky: 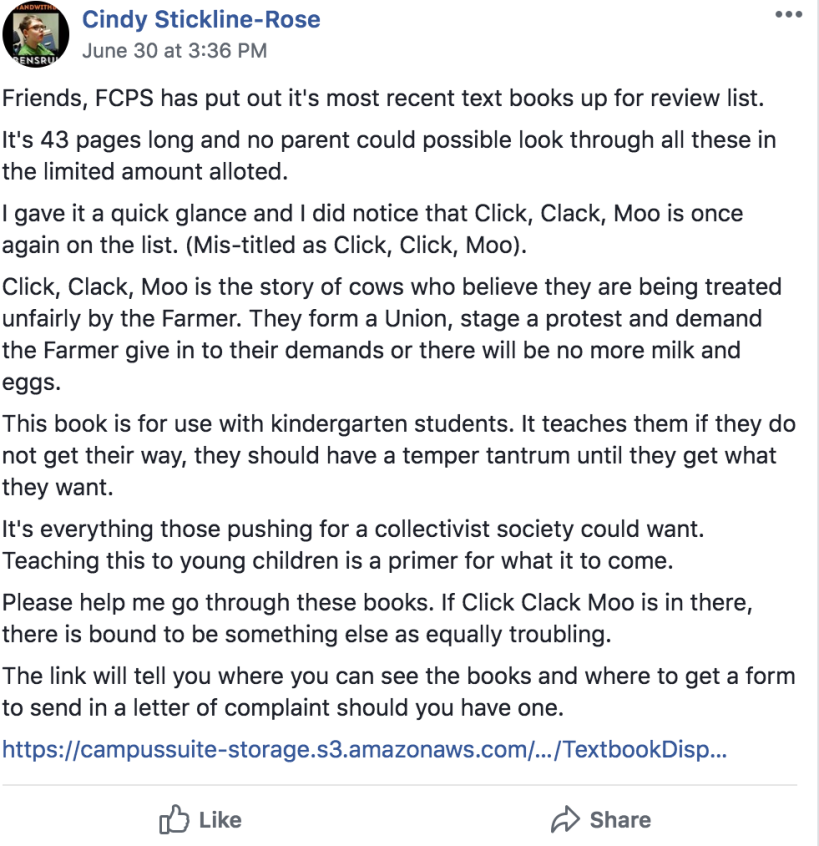 If you haven’t read the book, and Cindy obviously has not, it is not teaching kids to have a temper tantrum to get what they want. The plot of the story is as follows: The cows are very cold at night and since they cannot speak English, they type a letter to the farmer asking for some electric blankets. The farmer becomes enraged and refuses. The cows then talk to the chickens, who are also very cold at night, and they also ask for blankets. The farmer again refuses, and in return the cows refuse to give the farmer the milk produced from their bodies and the chickens refuse to relinquish the eggs they laid! The cows send another letter saying that they will relinquish the typewriter in return for the blankets, to which the farmer agrees. Can you imagine the horror of teaching your children speak up for themselves when they are cold? What kind of world are we living in anyway? Cindy also wants to know if the counterpoint is being read to the poor defenseless children?

Let us just imagine the counter point to this for a moment. What could possibly be the alternative to the cows and chickens not getting their blankets?

We contacted the author via Facebook about this and she was taken aback!  Her exact words after reading the above diatribe from Cindy were, “Wow…that’s a very interesting position! Only in today’s environment can typing cows become political.” Isn’t it horrible how Cindy is perverting the message of this book for her own political agenda? And lest you think this is the first time she’s advocated to remove books she hasn’t even bothered to read, check out these PIA requested emails that showed up during last election season: We know it’s summer and you want to relax, hell so do we, but there will be no relaxing if Cindy gets on the board. We all know too well what can happen when we get complacent. Forward this, and anything else you’ve seen about her, to every Frederick voter you know. This is an easy problem to solve. #localelectionsmatter!