Into the old inbox this afternoon appeared a very interesting read. Kirby (copied from Zeus only knows where) has prepared a Resolution that he has to know the council will not pass. The best way to go through this mumble jumble of American constitutional thought is to lay it out for you bit by bit! With commentary of course!

Man, this is going to be a lot of work for us. Let’s first look at the bills he’s upset at.  First on the docket HB1302, which apparently violates the majority of The Bill of Rights:

We’ve been here before with Kirby. He previously made us defend Kathy Afzali for voting for this bill. Basically a judge, not just some guy, has to determine that your behavior is severe enough to warrant having your weapons TEMPORARILY removed. You know because of cases like this. In sum, it’s to keep violent people, especially domestic abusers, from killing people. We cannot fathom why Kirby’s love for the weapon supersedes this common sense legislation.  (Doesn’t a case coming before a judge indicate that some sort of due process has occurred?)

Next up, SB707. Here’s both the summary of the bill and part of the fiscal analysis.

Anyone else notice how that analysis is in direct contradiction to what Kirby said about people already owning rapid fire triggers becoming instant felons?

You may remember this bill being upheld by the Federal Judiciary and that the Supreme Court REFUSED to hear any arguments against it. Thereby upholding its constitutionality. Because the Supreme Court (you know that pesky due process arm of the government) has also stated:

“Like most rights, the Second Amendment right is not unlimited. It is not a right to keep and carry any weapon whatsoever in any manner whatsoever and for whatever purpose.  For example, concealed weapons prohibitions … possessions of firearms by felons and the mentally ill, carrying of firearms in sensitive places such as schools and government buildings, or laws imposing condition and qualifications on the commercial sale of arms.”

And that part about the Maryland Constitution being severally violated by all of these laws? Well, we read it and the only part that we could find that was even close to mentioning guns (and it didn’t) was: 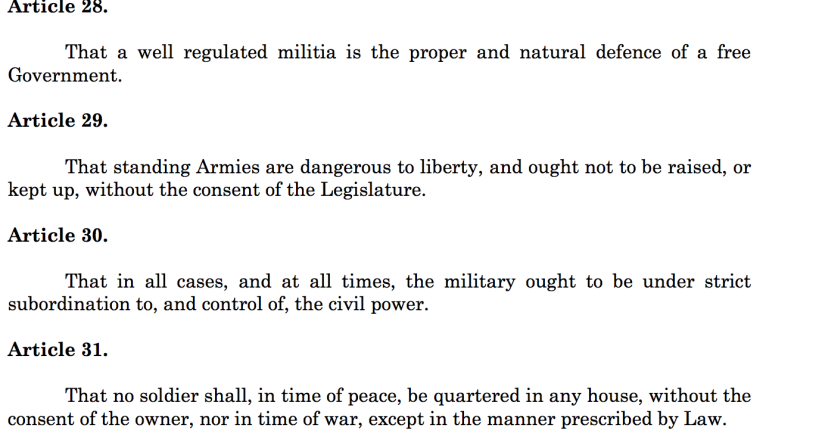 Some more study may be needed. Do ya want to see the rest? Neither did we, but here it is: 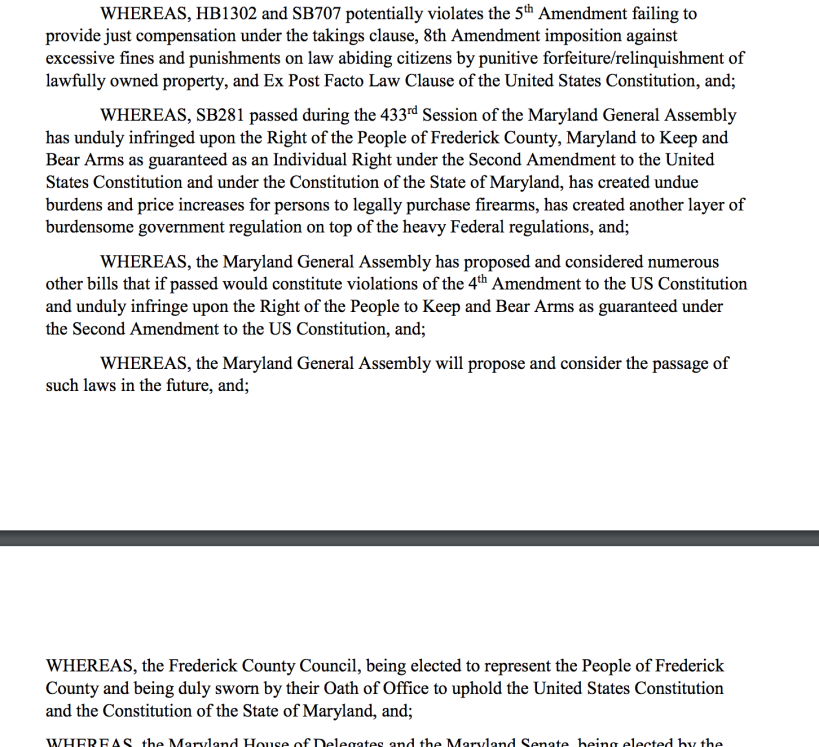 LOOK at that final FURTHER RESOLUTION!  He proposes that Frederick County be a safe place for all the poor illegal assault weapons. And, he wants the Frederick County Sheriff’s office to not enforce these state laws!!!! HOLY SHITE ON A CRACKER!

Has he not heard the news that most Americans are in favor of banning these types of weapons, as well as favoring universal background checks. Most people agree that bump stocks and rapid trigger devices aren’t so hunky dory. AND most people support getting weapons out of the hands of people who should not have them, even Kathy Afzali. Just who is Kirby trying to appeal to here?

7 thoughts on “Whereas, Kirby proposes Frederick County as a sanctuary ground for all the poor persecuted guns. WARNING: We did not make this up!”