This may sound like a broken record, but Billy was so bad tonight. So very bad.

He votes against the agenda but then for the budget adjustments. We’ve heard him on numerous occasions say that he doesn’t vote for budget items because the council doesn’t have their own budget director! So what gives? Is it possible he doesn’t even remember his own legislative philosophy?

Minutes are passed by everyone except you know who. All County Executive appointments are confirmed. You can read about the vote breakdown on those here.

The amended council rules are finally passed. Jessica adds an amendment that states that three members can add an item to an agenda if it has a legislative component and is in writing. Wonder why she felt the need to be so specific. Tis a mystery! Billy is the only hold out on this vote. In case you don’t get it, we will spell it out for you. This was Billy’s idea, but now that he will have to be prepared, he won’t vote for it. Could he be any lazier or less prepared? I guess he knows his limits!

Now it’s time to go on a break until the public hearings at 7:00. Billy throws a fit asking what is he supposed to do for 2 hours?! We have some suggestions, but we’ll keep them to ourselves for now.

The first two public hearings are on the antique, artisan and craft shops in the industrial zone and changes to the retirement committee for county employees. Both of these discussions went quickly with people only speaking of support of the bills. We predict this will pass at a future date.

Then comes Billy’s bill. And we feel the need to take back any compliments we may have given to him for finally putting forth some kind of legislation. For what he put forth was really worse than doing nothing at all.

So, we all remember the story of the business in Monrovia that was told by the county that they couldn’t do their wood-chipping on a piece of property that is in the general commercial district. And surely, we all remember that Billy and Kirby grandstanded about how this was another example of the county executive going out and shutting down all the businesses. In order to fix this problem, Billy put forth a bill that would allow this activity in all General Commercial (GC) zoned properties. What could be the problem? Well, according to county employees plenty.  Let us start with Billy’s introduction to his bill.

Billy, in remarks he surely could have refined during those two hours that he didn’t know how to spend, tells us that the county went out and said hey you can’t do this. And instead of shutting down the business (which didn’t happen by the way!), he did this! That’s his intro!

Then the business owner, who is the sole speaker on behalf of this bill, comes to the podium and asks, “What do you want to know?” Again,  Billy you could have used those two hours to have a pow-wow with this fella and better articulate what both of you wanted the public and the council to know. The business owner tells us that he IS in fact looking to move, and is still operating while that process is happening.  But, he still says that he wants the county to leave him alone while he looks. He also curiously adds that he is NOT looking for a change in the law.

County employee Steven Horn comes to the podium to express his concerns with the bill. Billy informs him that he only has three minutes. The problem the county, and this is also very well articulated by another county employee that speaks on this issue, has with this bill is that this special exception will allow anyone in these GC zoned districts to set up this kind of operation. Wood-chipping produces a lot of noise, vibrations and dust that can really affect neighboring businesses. The employees come armed with maps and other examples of how this bill would be very bad for the county. For if this bill passed it would not be out of the realm of possibility that a business such as this could set up shop next to a restaurant or church.

Tony wants to know if a special exception or floating zone could be made. The answer is no. He needs to do this on agricultural or industrial zoned land, like the piece he owns across the street! When legal is asked if the county executive can do anything, the answer is also no. Because people, the county executive, as is the fashion for all executives in this country, is charged with enforcing the laws made by the legislative branch! Can you imagine the uproar if Jan were to all of the sudden start telling businesses they didn’t have to follow the law? Wouldn’t  that make her the dictator they claim her to be?!

Billy scrambles to save his bill. Asks Steve Horn when the complaint against this business was lodged. Steve says he doesn’t know. Billy tells him to guess. (!?) Steve refuses to do so. The business owner shouts out February.  Billy then goes on a tirade about how the county has done nothing. (Remember this business is still operating and is looking for a new piece of land.) Billy is then reminded that county departments have to follow zoning ordinances and laws.  However, according to Billy we don’t really  need all these rules!!

Jessica steps in to remind the council that, according to their rules, council members are not supposed to interrogate county employees during a hearing. One last point before this discussion mercifully ends, the county attorney makes us aware that the property that this wood chipping is occurring on isn’t even owned by the company! What?! Sounds just like the wedding venue drama doesn’t it?

The obvious solution is that they are going to have to find the correctly zoned piece of land to do this on. The excuse that I’ve been doing it for this long does not hold water if you were violating the ordinance the entire time! As the county employees pointed out, once a complaint is made the county has to investigate and enforce the law. And Billy’s attempt to fix the law is so very bad and thankfully won’t go any further.

Tony and Kirby are silent. Jerry talks about the Opium workshop that he, Jessica, M.C., and the county executive attended. He also talks about the extended Middletown library hours and reminds people to apply for any property tax credits that they may be eligible for . Which reminds us of a discussion on Twitter we saw earlier this week. Billy claims that the Young BOCC was responsible for the senior property tax credit, but local hero Susan Reeder Jessee was not having it: 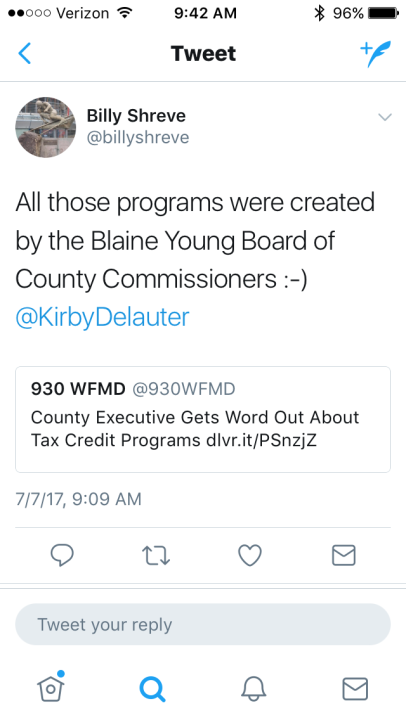 Billy has more to say. Says that county staff has come up with Zero ideas. Claims that he gets calls once a week complaining about businesses being shut down. Practically yells that county employees do nothing to help citizens and he’s sick of it!!! You know what we are sick of? Showboating and grandstanding by a guy who still doesn’t understand his role here.

He also feels the need to complain, again, about the two hour break this evening. Tells Bud that if you can’t schedule a meeting then you shouldn’t be doing it. Do we have to point out for the millionth time that it’s impossible to tell how long the first half will take? Sometimes it goes up to 7:00, sometimes it doesn’t. Does Bud possess a crystal ball that tells him how much discussion will take place? Why does Billy have to be like this? Why?

Jessica, M.C., and Bud all have nice things to say. We only wish it were enough to erase all the bad feelings we have from watching this meeting.

Next week there are two legislative days. Too much work for the summer if you ask us!

One thought on “Billy’s bill is so bad! Your 7-11 council meeting round up!”