This evening brought into the Yokel inbox a press release from none other than # himself! Stop snickering people, it’s true! He’s got some legislative initiatives he wants to jet on over to Annapolis. We can’t see one of these actually going forward, but at least he put some effort into it, right? Well….

The first item we are going to dissect has to do with concealed weapons. Here’s what Kirbo wants to happen here in Maryland:

To allow all law-abiding citizens the right to carry a concealed weapon; and to the education of the community to the awareness that ‘shall issue’ laws have, in all cases, resulted in decreased rates of violent crime.

All cases?!  Politifact rated that statement 1/2 true. Everyone knows that when you want to find out if someone is a plagarizing, you can do a Google search. Since we are a suspicious lot when it comes to Kirby, we did just that. Our investigating led us to a charming page called ammoland.com. His initiative is the same wording of a mission statement from some group called Maryland Shall Issue. So at least we know ole # can cut and paste! 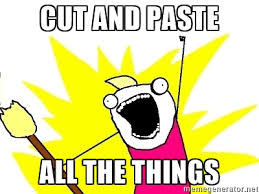 Of course we need some good old union bashing laws!! Here’s what Kirby has in mind:

Again Googled, This is already a bill introduced in the General Assembly, so we are not really sure why he’s touting it. Except he doesn’t like to miss a chance to tell us how evil and mean the teacher’s union is. Good luck with that one Exalted District 5 Commander!

We also have some legislation about school vouchers, education spending accounts and the ability to shift money around local construction projects. We’ll leave you with the bottom of his press release:

For additional information please contact Council Member Kirby Delauter at 301-600-1034 or via e-mail at KDelauter@FrederickCountyMD.gov

He’s asking for you to contact him folks! Don’t disappoint him!