You may recall that on April 1 the county council approved 22 amendments to the Monocacy Scenic River Plan.  You may also recall from our very own fine reporting that back in February Carroll Countians, dressed all in red (either to represent communism or blood), infiltrated our fine county hearing with their nonsensical proclamations of socialism and land grabbing. This Tuesday’s agenda looks like this: 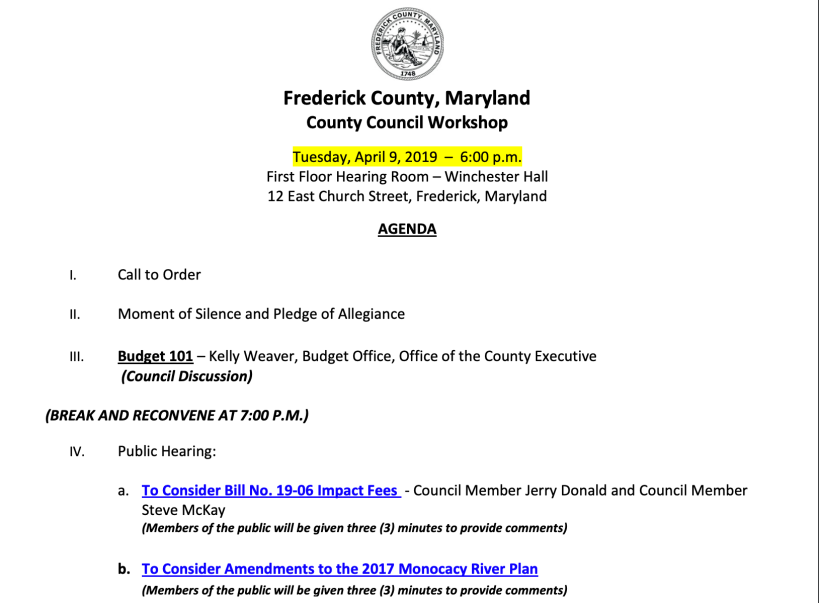 And predictably, the Carroll County response to our county making amendments is all kinds of cray cray. (NB: you are going to want to scroll past most of this covfefe–it is Epic-of-Gilgamesh-long.)

SAVE THE DATE, Tuesday April 9th at 7 pm for River Plan Public Hearing at Winchester Hall (12 E. Church St. in Frederick – pkg garage across street). Your attendance is crucial as Frederick County said they will vote on the River Plan on 4/16th. Let’s hope this is the final hearing!

It’s critical to show up; speak up if desired; and wear RED in support of property rights. Things are close to the finish line.

I. What Are Next Steps? When Will This River Plan Issue Conclude?

After the Frederick County Council Public Hearing next week on April 9th, the Council will vote on Frederick County’s version of a Monocacy River Plan update at the April 16th Council meeting.

This is likely achievable if Frederick County keeps up the positive momentum and spirit of cooperation to amend their version of the River Plan Update (in which they’re using the flawed draft 2017 River Plan as a basis, that was previously rejected by both counties) – to reasonably align as closely as possible with the successfully revised 2018 River Plan Update.

I say “successfully revised” 2018 Plan because the 2018 River Plan Update (prepared by the joint county Monocacy River Board) thoughtfully fixed the flawed and rejected draft 2017 Plan to include most every single suggested revision provided by Frederick County, Carroll County, and the Frederick County Planning Commission. The 2018 Plan also addressed concerns of the overall public. Thus, a truly collaborative and successful joint county River Plan Update was produced and submitted to both counties for their review and adoption.

The 2018 Plan is widely supported by citizens, The Farm Bureau, and Carroll County – whereas, the draft 2017 River Plan Update was widely rejected as it remained problematic and did not sufficiently protect property rights.

Carroll County has already approved the revised 2018 Plan as a desired River Plan Update as they felt it was environmentally strong and addressed remaining concerns about the 2017 Plan.

However, the new Frederick County Council (since the November elections) surprisingly, rejected the successfully revised 2018 Plan without credible reasons – as their concerns could have been reconciled in the 2018 Plan. The Council then did an epic flip flop to go backwards to use the flawed draft 2017 River Plan Update as a basis for their idea of a good River Plan Update. This is the SAME flawed draft 2017 River Plan that Frederick County and all the above parties had previously rejected as unacceptable.

This has caused worry because some think the reason to go back to the flawed 2017 Plan could be that it provides “wiggle room” for Frederick County to use that plan to later impose unnecessary restrictions to private property.. Whereas, the 2018 Plan had been revised (based on input from the counties and overall public) to remove “wiggle room” and sufficiently protect property rights.

This worry is not paranoia. Folks have genuine concerns because it’s been Frederick County from the start (not Carroll County or the River Board), who provided all the egregious language used in the prior draft joint county River Plan Update(s) that caused public alarm. If you recall, when the initial 2016 draft River Plan Update was released for public review…citizens called it a “Government land grab.” And attorneys who reviewed the plan’s recommendations called it an “unconstitutional” and unnecessary “regulatory-taking” of private land along The Monocacy.

II. Heading In The Right Direction But Not At Finish Line Yet:

However, Frederick County’s 22 Amendments to the draft 2017 Plan are almost all positive property rights oriented revisions that are headed in the right direction. With more positive efforts like this (as some of the 22 Amendments need tweaking and some more amendments are needed), it’s possible that Frederick County can work with Carroll County to get their plans aligned close enough to the highly supported 2018 Plan – for both counties to achieve a joint county River Plan Update that receives broad public support.

What happens if the counties don’t agree on an update to the existing joint-county 1990 Monocacy River Plan?

In this case, it appears each county can do whatever kind of county plan they desire regarding a river plan. And then I guess the 1990 Monocacy River Plan doesn’t get updated and stays intact. This is because a joint county Monocacy River Management Plan is required under the MD Scenic & Wild Rivers Act, which the 1990 Plan fulfills. It would be a shame if both counties can not achieve a single, unified joint county River Plan Update after all the hard work by the River Board, the counties, and citizens for over 2 years now.

Having multiple Monocacy River Management plans can be chaotic, impractical, and is a poor idea.

The good news overall is it seems the counties and citizens have far more agreements on updating the longstanding, joint Frederick / Carroll County 1990 Monocacy River Plan then there are differences.

In general, the 22 Amendments Frederick County is proposing to amend the draft 2017 River Plan Update are positive and focus on property rights language. Most of the amendments were taken in concept, directly from the 2018 River Plan Update. However, many have said some of the 22 Amendments need to be tweaked in the Frederick County plan as the property rights wording is watered down to be unacceptable in some cases.

Folks would also like some more amendments added as well. Again, the goal would be to have Frederick County’s River Plan Update (which they’re basing on the prior 2017 draft River Plan) align as closely as possible to the currently revised and highly supported 2018 River Plan Update.

IV. Please Provide Your Take On The 22 Amendments As We Prepare Our Citizens’ Group Presentation for the 4/9th River Plan Public Hearing:

We’ve heard from others in our citizens group on their take on the Amendments but we would like more opinions so we can prepare our presentation to speak at the 4/9th River Plan Public Hearing. Please respond back ASAP this weekend or Monday as the public hearing is on Tuesday next week. Also, if you can be a volunteer speaker as part of our presentation, please reply back. We need about 5 people or so.

To view the 22 Amendments that the Council is applying to the previous draft 2017 River Plan Update, please see attached. However, to understand what the Amendments and 2017 Plan are about – you need to compare the 2017 Plan with the 2018 Plan. And you can see both plans in one document!

This is easy to do. Just go to the Frederick County weblink below and scroll further down the page to view a copy of the 2017 draft River Plan with edits written in it in RED. The changes written in RED represents revisions to the 2017 Plan that produced the successfully revised 2018 River Plan Update. This way, you can see both the 2017 Plan which is the black text – and at the same time you can see the 2018 Plan, which is the 2017 Plan with the changes in red added. You have to click on each chapter separately to read through the full plan(s).

First of all, who writes emails this long anymore? Secondly, who reads emails this long?  And my God, what a load of baloney. So, fellow Frederick Countians please show up this evening to counteract this nonsense. The sooner we can rid ourselves of these Carroll County River People, the better.

Editors’ note: We are sure there are many very nice, sane people living in Carroll County. Can y’all do something about this please?!

One thought on “NO! Not again!”