Our own local social media crackerjack  is re-hashing some old business: 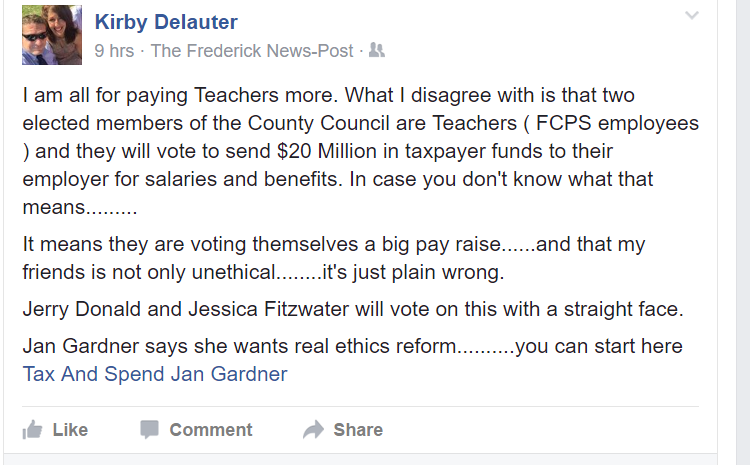 First of all, since when is he all for paying teachers more?!?!  Does he think we all have amnesia or something?  BECAUSE OH NO KIRBY WE DO NOT! We all remember your years on the BOCC when you refused to fund FCPS above MOE. And we know that when you don’t fund above MOE then there are no raises to be had! He also bragged about how he, if elected to the council and appointed liaison to FCPS, would point out how the school system could do more with less every step of the way! So please, spare us the b.s. that you are all for raising teacher’s pay.

Most of us know not to engage Kirby on his false equivalency concerning his not getting county contracts and Jessica and Jerry voting on a budget that includes money that will go to the school system. He appears to have some newbies and fellow dead horse beaters egging him on his comment section. But first, ICYMI, here’s one of the first graphics your Lady Yokels ever used that succinctly displays the difference between Kirby getting county contracts and Jerry and Jessica voting on the county budget:

Well, as is often the case, Kirby makes it all so much worse in the comments. First let’s go ahead and bash the guy we sit right next to during council meetings:

Hear that Jerry? Kirby plays the tiniest violin in the world whenever you try to explain to him….well probably anything. Save your breath from now on Council Member Donald, tis not worth it! Now he has some thoughts on the corruption of the County Attorney……

His next comment is in response to another person saying they would DEMAND answers as to why teachers can vote on the budget:

Oh the unholy corruption!!!! Come on Kirby take some pictures of these pick up paper basketball games!  We would ALL love to see that! And finally….

That’s right folks, the most dishonest people inhabit the walls of Winchester Hall. The MOST. We think someone doth protest too much! Perhaps this is some kind of projection he’s using. For don’t we often find those traits most abhorrent in others that we hate within ourselves? Kirby, you may not realize that you need to do this, but you really need to apologize to pretty much everyone you work with on the council. This kind of talk is not only rude, immature, vengeful and well just plain stupid. But, it isn’t very conducive to having any kind of functional government.

2 thoughts on “Lock up your horses!! Kirby’s on a dead horse beating spree…again!”