By now, we all know that Blaine Young was convicted on three out of the four counts of prostitution that he was charged with. Subsequently, he was given the equivalent of a slap on the pinky. We need to explore what happened in the courtroom a little more today as the details of his Ryan Lochtiesque story have come to light. You can read the whole description here…let’s begin with our analysis.

Blaine claims that on that cold February night, he was driving part time for the Yellow Cab company. While waiting for a fare at a local Shell station, this convo took place:

He was waiting for the client at a Shell station near the airport and he mentioned to other drivers waiting there that he was having foot and neck pain, he said.

Another cab driver said that he knew an attractive blonde in the area who gave good massages. Young said he entered the terms “BWI,” “massage” and “blonde” into a search engine on his cellphone and found the ad that led him to the undercover officer, according to his testimony.

Are we to believe that this mystery cab driver happened to know that an undercover police officer gave good massages in the area? And then, in an attempt to alleviate his foot and neck pain, Blaine decides it would be a fine idea to put the words “massage”, “BWI”, and “blonde” into his search engine?  We are also middle aged people who have also suffered from neck pain. When this pain became  unbearable we went to our doctor and got a referral to go to a physical therapist. Like normal  people do. Another alternative would have been to contact any one of the legitimate massage therapists that we have here in Frederick. So not only is he weaving a web of lies, but he is attempting to implicate this other poor cab driver, of whom he is accusing of leading him down this path. This part of his story gets one of these: 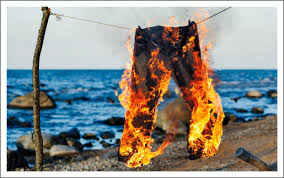 Next up we have this little nugget:

Young said he called to see if he would have enough time for a massage and when he learned that the person he believed to be a masseuse was nearby, he went to meet her. He paid her the $60 she requested, thinking it was for a massage, and he was arrested.

According to the police report he went to a website called backpage.com and answered an ad where the following was stated: “Smoking Hot Blonde, Fun Freaky and Fetish Friendly.” Not only that, there was a pic of a woman in a thong that accompanied said ad. Therefore, he not only lied about the purpose of the call, well, we’ll let the judge take it from here:

“A 12-year-old boy can look at that ad and know what it’s about,” the judge said.

Duden said he did not believe Young’s version of events. Young should have reasonably concluded, he said, that the ad — which referenced fetishes and contained an image of a woman in a thong — was an ad for prostitution, not massages.

In addition, here’s what the undercover officer had to say:

The undercover detective testified at trial that Young entered and quickly began to undress. He told her that he didn’t have much time. She asked him what he wanted and Young inquired what she did. The undercover officer said she responded everything. She then asked if he wanted sex and he said yes, according to the officer.

For this part of the   lie he gets:

If you click back to our original post on this story back in March, you would see that Blaine apologized on Facebook for this arrest. The prosecutor brought up the post and Blaine also had an explanation for that!:

When prosecutor Natalie D’Antonio asked him about a Facebook post in which he apologized for his actions and referenced “demons to deal with and conquer,” Young said that was not an admission of guilt, but expression of remorse for what he had put his then-fiancee, children and family through.

We will just answer that with this:

Maybe, just maybe we would believe that he’s trying to change if he got before that judge and took responsibility for what he had done. Instead, he weaves a fantasy that not even the most dense among us could possibly believe. This just shows that he’s just as he always was and  probably always will be. WTOP ended their coverage of his trial with this:

“I’m just sorry and want to be a good citizen and get back to my community,” a sobbing Young told the judge.

You know what Blaine? Your community has had just about enough of you. Enough is enough. Your chances are all used up!

7 thoughts on “The slacks of one Blaine Young are charred and ashy! Yokel Fact Check Edition.”