This morning’s Political Notes is chock full of good information. First off, Governor Hogan is commanding each school system come before the next Public Works meeting to beg for school construction money! If the school districts dare not appear then screw all the students in your district! Hogan  said if they do not appear “..they won’t be getting any money”. Even though lawmakers and school officials have asked for this annual “Beg-A-Thon” to stop the governor is going to continue to make you grovel before his divine presence. 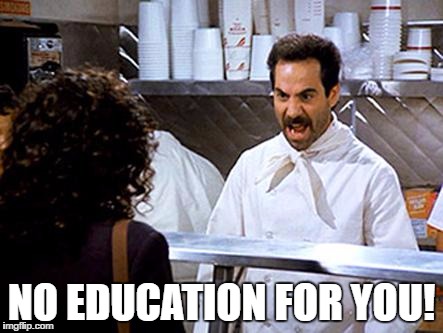 Here’s how State Treasurer Nancy Kopp has characterized these meetings:

Kopp said she agreed with her colleagues about the board’s ultimate authority to approve the school construction funds, but also said the Beg-a-Thon has turned into a “political barrage” and “bullying” in recent years.

Sounds great! Next up in the column is Kirby. At the last council meeting Kirby tried to characterize Jan as some greedy land confiscator. He had a whole list of offenses Jan had committed against the poor citizens of Frederick County. However, he appears to have exaggerated those claims. On the accusation that Jan gobbled up all the land along Route 15 the County Executive had this to say:

She said the 2001 rezoning action was at the Frederick County Planning Commission, and though she was the county commissioners’ liaison to the board, she was at another political event when the U.S. 15 rezonings were voted on. That move by her colleagues on the planning commission ultimately had unintended consequences and was rolled back, she said.

Huh. Well, Kirby can’t be right all the time can he? The new recommendations (that’s right recommendations not a law or Executive Order) concerning the Monocacy River and water buffer zones is what has gotten Kirby all in a pinch. The Monocacy Scenic River Citizens Advisory Board has recommended that properties along the river have a protected water buffer of 300-500 feet. You know to prevent the Monocacy from becoming a simmering cess pool of chemicals and pollutants. Some potentially affected landowners are understandably upset. Nobody likes having to part with their property. And when they have to they should be justly compensated. We need to protect our waterways, even when it upsets some. All interested parties should lay their arguments before the government and said evidence should be weighed with the public good as the ultimate goal. In case you want to read up on the science of what water buffers do here is an informative joint study by Virginia Tech and Virginia State University. We need good, educated discussion with a result that is fair as possible to all parties involved. Not knee jerk statements like this, from someone whose only goal it seems is to be outraged about everything all the time:

“Environmentalism is the new socialism. You know, if you want to take something, just call it environmental. Just call it somehow environmental and everyone’s got to bow down and give up all their rights for that. It’s ridiculous,” Delauter said.

8 thoughts on “Kirby mischaracterized something? How can this be?”