Despite his promises that he was going to remove himself from the public view, Blaine can’t seem to stay away from those WFMD airwaves.(Which is funny because we heard that DC 101 was super anxious to talk to him last week.) Whether it’s calling Bob Miller up to admit he lied to the judge, or appearing on Pattee Brown’s weekend show to recite a laundry list of excuses, he just can’t seem to help himself.

“What is it now?”, we can hear you groan!  Apparently he called in again yesterday to bash Jan’s decision to bring Montevue and Citizens back into county control. False equivalency is up first on the menu:

“The fact is this government shouldn’t be in the health care business. I think that we’re learning that at the national level with people wanting to overturn Obama Care,” Young said.

He’s got to find a way to bring Obama into this doesn’t he? Well, he might be right to a degree. A recent Gallup poll found that almost 60% of people favor getting rid of the ACA in favor of a single payer system. That’s right, people want MORE government regulation of their healthcare.

Here’s the part that really gets us though. You would think if one really wanted to argue how bad a deal being in the healthcare business is for the county one would be a tad more articulate than this:

“We have lost tens of millions of dollars, as high as maybe sixty or eighty million dollars, maybe one hundred million,”

And this part just doesn’t make any sense at all:

“And obviously Aurora must be good at patient care because they’re going to be taking care of the patients now up to the next 18 months. Which my prediction is that they will be in there longer than that. This is just a ploy to kind of say that I’m taking it back and that someone else is going to run it because all we ever heard about was how bad Aurora was,” Young said.

Mostly we heard what a bad financial deal this was for the county. Coupled with the fact that our indigent residents would no longer be guaranteed the care they so deserve. But how is it a ploy? That sentence makes zero sense. 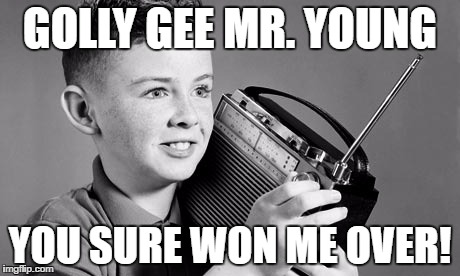 Why does WFMD keep giving him an outlet in which to express himself?

2 thoughts on “One does not remove thyself from public life by continuing to call into the radio!”