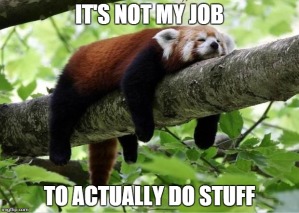 We are all acquainted with the myriad of excuses that Billy likes to give for not voting. He doesn’t like the process, doesn’t have help, yadda yadda yadda. Yawn!  In today’s Frederick News Post let’s add contacting the trucking, GPS, and railroad folks to that list of dislikes. In a discussion over what the county could do to help alleviate problems associated with a bridge on Route 75 this happened:

Md. 75 is a state highway, and the bridge over it is owned by CSX, so the ultimate responsibility for the structures lies with the SHA and the rail company. However, Councilman Billy Shreve recently made suggestions for what the county can do to help alleviate the situation.

Shreve, in an email exchange, forwarded a constituent’s concern about the bridge to the County Council and county executive. In that correspondence, he suggested contacting GPS companies to ask if they could include in their programs a low bridge warning for truck drivers. He suggested working with CSX toward a long-term solution.

Councilman Tony Chmelik concurred, and County Executive Jan Gardner responded by writing, “I say, go for it guys! These suggestions were looked into years ago but the players have likely changed, GPS has changed, so give it a go!”

In an interview, Shreve expressed frustration that Gardner suggested he make contact with the parties because he considered that to be an administrative function.

So maybe we should amend our title to “Billy would like to abstain from any and all responsibilities except forwarding emails.”  In response, this is what Jan had to say:

Gardner disagreed that is was an executive function, she said, because she is tasked with managing the county, and Md. 75 is a state road. She added that Shreve did not request assistance to make contact with the relevant agencies.

“It’s his idea,” she said in a phone interview, “so if he thinks it’s a good idea, I’m not sure why he doesn’t want to pursue that.”

The county has been involved with conversations between the SHA and police for several years, Gardner said. It has worked with Costco to distribute warning fliers to truck drivers and secured some funding from Costco for a yet-to-be built truck turnaround before the bridge.

We don’t know either Jan. It seems as though Billy’s only goal lately is to make Bud and Jan look as bad as possible. To hell with the county and doing anything remotely helpful. He’s got his vendettas to run. And let’s envision, just for a moment, an alternate scenario.  Let’s pretend that Jan went ahead and contacted GPS. Can you imagine the response? We certainly can, considering she’s been called both a dictator and Queen Jan.

“Queen Jan took my idea and is now passing it off as her own”, said Shreve in a phone interview. “She constantly bypasses the County Council and is running the county at her whim.” whined Chmelik. “When will she let us do anything”? the two sang in chorus.

At this point Jan and Bud can’t win. No matter what they do or what they say Billy will be there with some insult or wisecrack. This is no way for our county to be run. So Billy: Stop being terrible! Just stop!