Now we knew tonight was going to be one hot mess. That the crazies were going to come out of the wood work. But oh Helena up on the hill, the ignorance we have had to hear tonight has made us fear for our species’ future.

In the beginning, our eloquent councilwoman Fitzwater, gave a very stirring introduction. Her reasons for the repeal and a very necessary attack against hate group ProEnglish made our hearts soar. And there have been many, many citizens that have restored our faith.  Then there’s this guy:

What does this guy have to say? Well, it has nothing to do with diversity. It’s costly (he of course has no evidence of this), and it unifies us as Americans! It’s the way it should be! 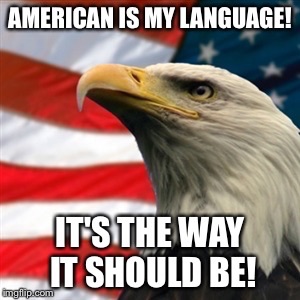 The anti-repeal people are very angry. And I have a feeling they are angry about a lot of things. Some of them thought it was hilarious to speak some Spanish while they were up there. And yes, we were rolling on the floor over that. Here are some quotes from this evening:

Landscapers and Dairy farmers are reaping the benefit of this.

I don’t feel like I live in America! I am 67 years old and I don’t need to learn another language!

I worked with a Native American who was grateful he was taken from his family and forced to learn English in a government school.

You, Mr. Otis, are a monarchist.

This repeal is only a personal opinion!

This is America! English only!

We are giving our country away. We are going into the ground.

Whew! This is almost too much. This ordinance, admittedly so, has no real legal teeth since there are State and Federal laws that must be obeyed. However, it makes us look like uneducated, backwoods, xenophobic rednecks. And enough is enough! There is no need for it! Good-bye!

Tune back in August 18th for the result!