I’m sure no one on the Council has any vision for the future. That’s certainly why there will be a vote on repealing the County’s English only ordinance. Heaven forbid our little bitty county comply with Federal and State law concerning providing documentation.

And,  sure there is no vision in offering up legislation regarding affordable housing. Why we would we want to get rid of ghetto areas and make sure all our our schools have a more equal mix of low income kids instead of them being concentrated in just a few schools? Surely, that is a very bad idea. Is low income catching? Shudder. 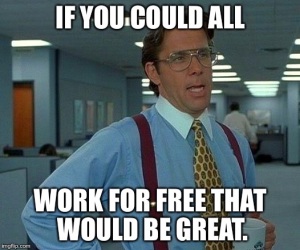 Let’s look at the list of new hires and their salaries.  The first thing that seems like a giant waving red flag to us is Kirby saying he has a problem with Janice Spiegel being a liason to the BOE because we have two teachers on the council that could do the job for free. Wasn’t he just crying a few months ago that it was a conflict of interest  to have them vote on matters relating to the BOE because he thought it was a  conflict of interest? (It isn’t a conflict, is he suddenly acknowledging that?) Surely he doesn’t think Jerry and Jessica should have to do their day jobs, plus their elected Council jobs and then volunteer to be BOE liasons on top of that (for free y’all!) Maybe Billy can volunteer to be Fire Chief. He already gets all the calls from drunks needing rides.  I’m betting being Chief could be just the new volunteer position he didn’t know he was looking for. Why not get rid of High Sheriff Jenkins while we are at it? Couldn’t his salary be used for something else? Maybe Kirby can take that position on as his volunteer job.

I don’t think anyone is under any illusions that Billy and Kirby will just go along and get along with anyone. (Unless directed to do so by Blaine). Maybe Billy could actually vote on something instead of abstaining all the darn time. Maybe,  he will make a few phone calls to help get all the GPS companies up to date on that darn low CSX bridge in Monrovia. I do hope the all the voters are paying attention and hold their Councilmen accountable for all that they say and do.