You may have already seen this, but if not, we are very sorry, both for having to share this announcement with you, and for letting you know we did not come up with the Hate Slate moniker. But the moniker is so accurate. Let’s breakdown their announcement.

Our first thoughts are, if you are running for the Board of Education, you should have someone proof read your announcement. We made a few comments and then had a teacher do it for them.

Next, let’s read between the lines. What is the unwritten message in each section?

So is Seth Eisenberg Frederick’s very own Paul Blart, Mall Cop?  Retail security officers don’t usually carry firearms do they? Ok. So let’s assume his role is as security expert on the slate. Keeping students safe at school is very important. I’m sure his experience in detering shoplifters will be relevant.  Edison’s role will be student expert since he has not yet graduated. We will have to see if his speech is more eloquent than his written words.  Since Chaz is a Linganore graduate we are going to make a leap and assume the first amendment rights he is so concerned about involve a headdress. Anyone care to define alma matter for us?

The Board of Education isn’t taking responsibility? This is Cindy’s jab at Teresa Alban whom she has shown to have a personal vendetta against. I’m not sure who the politicos and bureaucrats are supposed are supposed to be. The current board is comprised of parents and former teachers. They want to rid education of “politicos?” With highly politicized statements, highlighting they are conservatives? While name calling folks “liberal” like that’s a bad thing. And for ending the “press release” with a Trump-ism?

Who says other expenses = waste? Other Charges is one of six MSDE categories that the state mandates the BOE group expenses into so that when the state receives the budgets for all 24 school districts they can more easily compare and evaluate them. Of course our Board knows what is in these charges because they do not deliberate over our expenses and revenues using these 6 broad MSDE categories. They use an enormous book of hundreds of pages with line items by department. Broadly, that Other Charges include appx. $121 million of fixed charges (most of FCPS employee benefits such as tuition reimbursement, employer FICA taxes and employer premiums for health and dental), $14 million in utilities, $9.3 in non-public placements. And they want a scientically proven reading program? Since when is Cindy interested in science?

We are also unsure why they are saying that 47% of students failed English PARCC. It isn’t a pass/fail test. There are levels of scores for PARCC – 1-5. 4-5 are “meets and exceeds expectations.” 1-2 are “did not meet” and “partially met.” A level three is defined as “approached expectations.” For each assessment there are components/skills that are measured, 4 or 5 for each assessment and students receive scores that indicate where they are on each component. FCPS PARCC assessments have increased in levels 3-5 over the last three administrations. She is correct that the 2017 results reflect that 53% of students overall received a 4 or 5. However, if you include students receiving a “3”, that number is 77.5%. We wouldn’t label students in that range failing. We would also remind folks that the equated levels for proficient and above in our past MSAs and HSAs would have likely equated to 2 and 3 on these current PARCC assessments as the rigor has been ratcheted up. 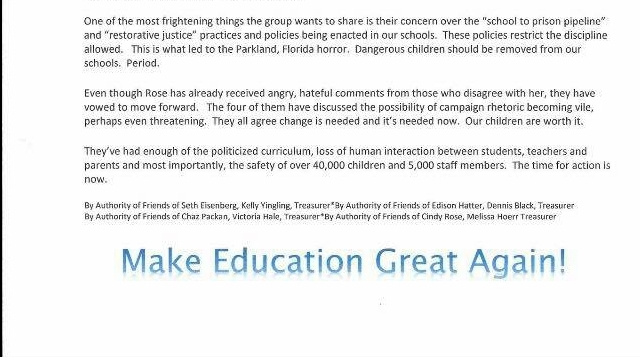 Restorative justice does not restrict allowed discipline. In fact it has no bearing on what discipline may or may not be used. It is a method of creating a school community that seeks to have students and teachers better understand each other and how their individual actions affect themselves and others. It puts the ownership and responsibility of conduct on both the individual and on the community (so that everyone is helping everyone else be there best selves). That notion they are peddling is a scare tactic. There is indeed a school to prison pipeline. Just look at the disproportionate suspension and jail time students of color receive for the same offenses as their white peers. There is no arguing the numbers. It’s not about excusing behavior. It’s about seeing students for who they are, why they are behaving and providing them with tools to control their behavior and stay in school. We forget that the role of schools, in relation to discipline, is to teach appropriate behavior and self-control. It’s not just meant to punish.

This press release reveals an obviously shallow understanding of complex and nuanced issues. Did they make the decision to run based on their misunderstanding of the issues? Do we want our school system run by folks who make judgments on bullets, a sentence or two and a fraction of the information?

12 thoughts on “The Hate Slate makes its debut.”